We are an independent tour provider which operates only in Hamburg. We started in June 2014 with two guides; soon we had a small team and founded a company. Now after some changes we are 2 and an additional person for support.

Today we cooperate with a number of passionate Hamburg guides, all of them present their tour in their own individual way and tells the city´s stories from their unique perspective, e.g. as a local born and raised here, as an American who made this city his second home, as an international city planner or someone who simply came here for love! 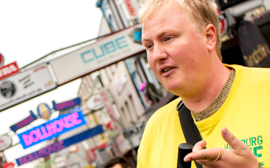 Brent came to Hamburg in 1998 to pursue his studies in music. He fell in love with the city and emense cultural opportunities here in Germany in general. He worked in a few orchestras and opera companies around Germany and eventually decided to give up his professional career as a musician. He made his way back to Hamburg to settle down a bit and decided to start showing other fellow English speakers the beauty and historic richness of the city all the while soaking up the many cultural experiences that the city has to offer. Although he speaks German fluently and Hamburg has become a second home for him, he chooses to concentrate on English speaking guests. When he is not on a tour, he enjoys his time raising his son or his friends with a nice craft beer or two. 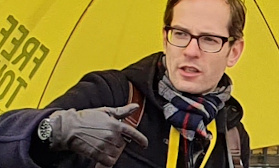 Matej was born in Slovakia and came to Germany at a young age to study economics. After his Master‘s degree in the south he moved to France to add another Master's degree in urban planning. He finished his second degree in Hamburg and since then he just can't leave. He especially appreciates the many parks in the city and the proximity to the water but also the local mentality. In his tours, Matej combines his passion for Hamburg and urban planning, often with a touch of ecology. He does his tours in German, English, French and once even in Slovak. 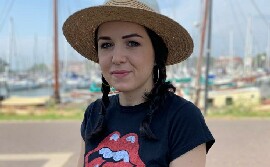 Christin originally comes from Hessen and has found her way via Baden-Württemberg and Schleswig-Holstein to Hamburg. Since 2012 she lives here as Quiddje and does not intend to leave Germany's most beautiful city. Christin loves to discover the world on foot, either in "her" city or every year from a different mountain top. On her tours she always has her husband, her son and her camera for numerous snapshots in her luggage. As a trained hotel and tourism manager, she is happy to answer all your questions about our tours and support the tour guides from her living room office.